Heroic solo swim from England to France by Stu 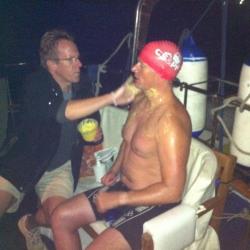 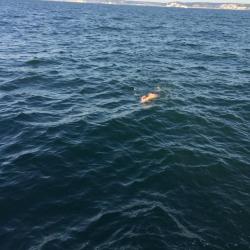 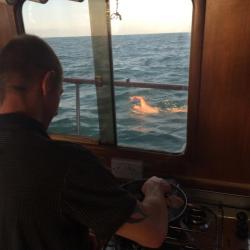 Stuart and his swim to France Big congratulations to Stu Bowman, English Channel Solo Swimmer, who set off to France from Shakespeare beach at 04:25 on Tuesday 5 August 2014 to complete his first solo swim of the English Channel. Stuart reached France in a time of 15 hours and 24 minutes yet to be confirmed.

His pilot boat was Optimist, skippered by Paul Foreman. Stuart's support crew include Mark Fabik, Dean Browning, Laurence Plant and Mark Johansen. There was cause for additional celebration as today the young Mr Foreman became a grandfather. Congratulations.

It would be a great motivator for Stuart if you would kindly contribute directly to the Alzheimer’s Society charity  which he is swimming for. Stuart is also swimming in memory of his Dad and we all wish Stuart a safe crossing.
The Alzheimers Society is the UK’s leading care and research charity for people with dementia and those who care for them. There are 700,000 people with dementia in the UK with numbers set to rise to one million by 2025.

Mark Fabik 1830: Looks like Sangatte. He is going well but is tired. Weather nice and flat. Just got to get a little bit more inshore.

Mark Fabik 1730: Nick (Adams) threw his support at Stu on the way home from his tenth solo swim along with throwing a few jelly babies.